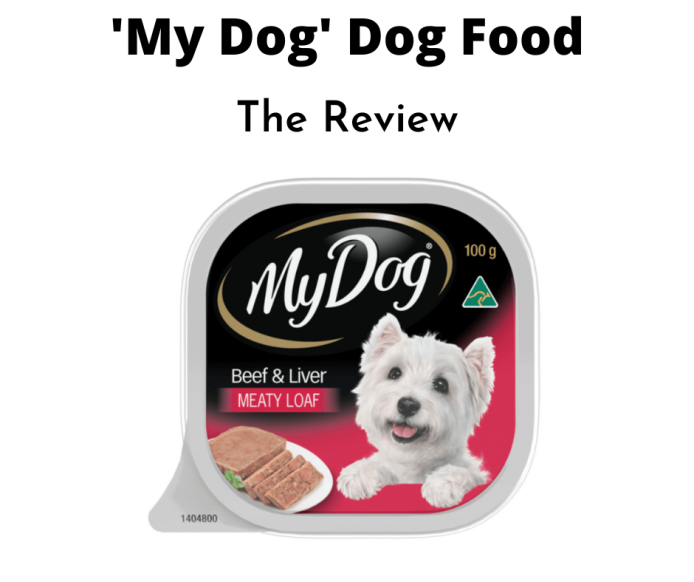 The 'My Dog' Dog Food Review -
A Closer Inspection

This affordable dog food comes straight from multinational Mars pet care. Is it good enough for your pup? In our My Dog food review, we’re covering everything you need to know about this brand. Get ready, this one isn’t pretty.

“My Dog” dog food is a dog food brand made by Mars pet care, the same company behind Pedigree, Whiskas and Royal Canin.

This brand mainly focuses on wet food, offering both cans and trays.

My Dog has a wide variety of moist food recipes available. However, we will be focusing mainly on the kibble recipe to make comparison easier with other brands we’ve reviewed in the past. We will still mention the wet food options, of course!

Many dogs like the taste of this food. According to our research, pups enjoy the taste of the loaf recipes in particular, and many owners use it as a topper to make traditional kibble more enticing. This is to be expected since both wet and dry food has “chicken flavour” as the fourth ingredient. It is unclear whether this flavour is artificial or natural, which we’re wary about. There is no claim on the packaging or on the website stating that all flavouring is natural, so we’re inclined to think it’s artificial.

Artificial flavours make dog food smell and taste better, but it is a blanket term that can cover many nasty additives. Hundreds of flavouring components could be used, and some of them could be harmful, such as propylene glycol, BHA and others [1]. Although pet food companies aren’t legally forced to disclose the specifics of their flavours, what appears as a single ingredient in the list can in fact cover between 20 and 60 different ingredients. Sometimes, more than 100 different flavourings are used… even if the ingredients only state one [2].

Most times, each of these different flavours includes “extras” such as emulsifiers, preservatives and solvents that aren’t disclosed on the label. IN short, artificial flavourings in dog food add plenty of unknown ingredients that tend to negatively affect your dog’s gut flora and might be the cause of allergies and intolerances.

In general, sensitive dogs should avoid artificial flavourings to lower their chances of reacting to a food.

Due to the use of artificial taste enhancement, we’re taking off 3 stars from this brand.

This brand’s ingredient list is short, for both dry and wet food. While this can be a positive, in this case, it isn’t. These are the ingredients in the “semi-moist kibble”:

All the listed ingredients are blanket terms supposed to represent several ingredients at once. So, for example, “whole grain cereals” can be anything from wheat to corn, rice, barley or a mix. The problem with blanket terms is that they tend to cover less-than-ideal ingredients. Remember, companies want to make any food sound better than it is. On the other hand, it also means that the actual composition of the food will change from batch to batch. There is no way of ensuring your dog gets the same ratio on the next bag, and sensitive dogs can have an upset stomach because of this change.

It is also important to note that the first and third ingredients are cereals. The difference between the quantities of “wholegrain cereals” and “meat & meat by-products” was so large they couldn’t swap the order of the ingredients to place meat first (a common practice when ingredients are in the same quantity). The use of blanket terms signals a general lack of information towards the consumer, and we don’t love brands that withhold information from dog owners.

Another red flag is the use of a “typical” instead of a guaranteed analysis. In general, brands that use a typical analysis do so to avoid constant food testing. With a guaranteed analysis, pet food brands would have to consistently ensure all batches share nutritional stats. In general, a typical analysis paired with the use of blanket terms shows a brand prioritises ease (and economic gains) over quality.

The composition of the food itself is fine and in line with other low to mid-range foods. There is 24% of crude protein and 10% of crude fat. These percentages are in line with AAFCO recommendations, although the fat is low for our liking. On top of this, considering the bulk of the food is split between wholegrain cereals, meat and rice (2 out of 3 are cereals), it is likely a good chunk of that protein is of vegetable origin.

The wet recipes don’t fare a whole lot better. Blanket terms are used throughout the ingredient list, although at least “meats” is the first ingredient, followed by gelling agents. We don’t like the lack of transparency on the gelling ingredients. Some specific gelling agents have been known to be carcinogenic, such as cassia gum [3]. Without knowing the specific ingredients, it is impossible to confidently give this food to any dog.

We don’t love the ingredients used by this brand and the blanket terms are concerning. We’re taking off 3 stars from this category.

As we’ve mentioned above, the overall crude protein percentage of this food is 24%. This is in line with AAFCO recommendations for adult dogs, that states healthy adults should have food with a bare minimum of 18% crude protein.

Despite these minimum requirements, My Dog has some of the worst ingredients we’ve reviewed. The use of the very general “meat & meat by-products” is concerning. A parenthesis indicates these can come from either chicken or beef, but there is no guarantee of their actual source.

Again, as with the “whole grain cereals”, the use of these general terms indicates there is no way of knowing the exact composition from bag to bag. It is very likely the recipes change according to what is cheaper at the time of production, which isn’t good news for sensitive dogs.

On the other hand, that “24% crude protein” probably has a good chunk of vegetable protein and doesn’t even come exclusively from meat. Remember how cereals were the first and third ingredient? This includes corn, rice and wheat, which are deceptively high in protein (up to 15% per 100 grams). If the “whole grain cereals” include plain gluten (which is straight-up protein), the protein from meat is likely much lower.

Another red flag? Although there are two different kibble recipes, the ingredient lists are exactly the same. Of course, dog food “recipes” are mainly chosen for marketing purposes, but having the same recipe across flavours just adds to the feeling of prioritising cheap ingredients over quality.

The canned recipes don’t fare much better. Again, we see the same ingredient list across recipes regardless of the supposed flavours. The first ingredient in the wet food options IS meat, which is a welcome change from kibble. Nevertheless, it is a blanket term again, and the specific meats used can and probably do change from batch to batch.

Of course, this brand doesn’t offer single-protein recipes since there is no way of knowing exactly which meats go into each batch. There is no high-protein option for active dogs or puppies.

These issues make us think the brand priorities cheaper cost over food quality, which is never good when it comes to dog food. We’re taking off 3 stars from this category: one of the worst dog foods we’ve reviewed!

For a kibble with such a short ingredient list, the additives make a surprising chunk of it. In our book, this isn’t good news.

One of our main concerns with this food is the addition of glycerol as one of the ingredients. Considering this brand’s continued use of blanket terms, the appearance of plain glycerol points out that this specific ingredient is significant enough to merit its own item on the list. Glycerol, a specific form of glycerine, is a controversial ingredient. This compound has no nutritional value for pets but is used as a humectant to increase food palatability. However, there are two types of glycerine used in dog food: vegetable glycerine (also known as human-grade) is derived from plants. In contrast, plain glycerine is the by-product of diesel production [4]. As a by-product, glycerine (and glycerol) have traces of diesel and other harmful chemicals used in the production of fuel. These include methanol (used to make formaldehyde) and sodium [5]. It isn’t something we’d want to give our dogs!

Beet pulp is also featured high on the list. This ingredient is basically rendered vegetable fibre: it adds fibre to improve digestion but also doesn’t have huge nutritional value. It is also used to give your dog’s poop more consistency, which creates the feeling of feeding “high-quality food”.

The use of blanket terms continues throughout the list. We have “vitamins & minerals”, that probably come from a powdered mix, and “vegetables” which can be anything from fresh mixed veggies to potatoes or semi-rotten scraps. We’re wary of the “vegetable oil” used in this food. Is this palm oil? Sunflower, canola oil? We’d never know. If cost is a priority (as it probably is), there is a high chance this is an oil mix that probably has oil scraps

We’ve already mentioned our concern with the artificial flavourings in these recipes. We are especially hesitant because these appear twice on the list: first as chicken flavour, then as the last item on the list under “flavours, colours and antioxidants”. This brand doesn’t state there aren’t artificial colourings, flavourings and antioxidants in their food, so these are likely a mix. Considering the general concerns about the use of artificial preservatives and colours, we wouldn’t give these recipes to our dogs.

Due to our major issues with the additives in these recipes, we’re giving My Dog 1 out of 5 stars in this category.

The price is likely the only positive point of this brand. Of course, this is a cheap dog food and one of the reasons why people still buy it. The wet food is particularly easy to find and can be found as multipacks.

In our opinion, price alone isn’t a good reason to get this brand. Plus, the actual quality control seems lousy. Many owners are complaining about plastic and glass chunks found in the tray meals and cans [6]. Only based on that, we wouldn’t feed this brand to our pups.

We’re giving this brand 3 out of 5 in this category.

Do Not Buy If You…

There are many reasons why we would not recommend this food, but stay far away if you:

We aren’t fans of this brand. These recipes don’t provide enough meat to be healthy for dogs, and the amount of cereals in them is concerning. Stay away from this one, even if the price is good. Your dog deserves better food!