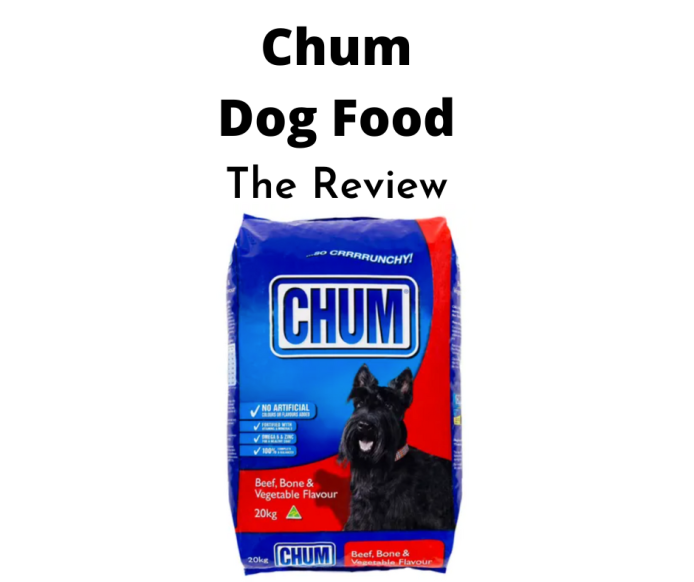 Looking for cheap dog food? This affordable brand might have appeared on your radar. Before switching your dog, get ready for a nasty surprise. In today’s Chum dog food review, our experts will be covering everything you need to know. A word of caution: it isn’t pretty!

Chum dog food is one of the oldest pet food brands from Mars. It first came out in England in the 1960s [1]. We can’t attest to the quality of that original food, but what we have available in Australia isn’t pretty. Here are the basics:

Dogs are split when it comes to the taste of this food. Some owners mention their picky eaters gobble it down, even dogs that generally despise kibble. For others, their pups don’t want to get within a 1 km radius of a bowl of Chum.

What people agree on is that this brand makes dogs gassy and their poops smelly. Several owners have stated they can’t stay in the same room with their dogs after meals! The food itself also has an intense smell, although the canned recipes smell worse than the kibble.

Considering the smell and the gassiness, we’re taking off 3 stars in this category.

This is one of the worst ingredient lists we’ve ever reviewed. But let’s start at the beginning with a look at Chum dry dog food. At first glance, their ingredient list is short, which some people would say it’s a positive. Well, in this case, it isn’t.

The first ingredient in this kibble is cereals and cereals by-products. Wheat, barley and/or sorghum are mentioned in parenthesis. This has several implications: first, the actual cereals and their percentage can (and will) change from bag to bag. Second, this kibble has cereals as the bulk of the food, and the difference is so large they couldn’t do what most brands do, which includes “swapping” the ingredients when they come in roughly the same proportion. Third, the use of blanket terms (“cereals”) instead of listing specific ingredients shows there’s a lack of care. No interest in communicating specifics to dog owners.

Second on the list, we have the very general “meat and meat by-products”, indicating there might be beef, chicken and/or lamb. Again, a blanket term that means there is no way of knowing the exact composition from bag to bag. This increases the chances of an upset stomach, particularly if your dog is sensitive to sudden changes in diet. A big red flag is that the recipes don’t change from one “flavour” to the other, which blatantly contradicts the labelling with different names. This, paired with the first ingredient being “cereals” just adds to the feeling of having lots of cheap fillers, and prioritising price over quality.

The rest of the ingredient list is relatively short, and one could expect that every ingredient from then on would be in a fairly small quantity. Nevertheless, we have to mention the salt.

Unlike any other dog food we’ve reviewed, Chum has salt as the third ingredient (!!). Remember that ingredients are listed by significance. This means there is more salt than vitamins, minerals and vegetables. Our team had never seen salt so high up on the ingredient list!

It is widely accepted in the medical community that salt isn’t recommended for dogs [2]. Vets state that too much salt can lead to stomach upset, diarrhoea, muscle tremors and even seizures in dogs. Salt poisoning is a reported, real condition and dogs are particularly prone to it. According to Merck’s veterinary manual, dogs can even develop hypernatremia (salt poisoning) by swimming in the ocean [3]. Imagine feeding a kibble with salt as the third ingredient.

Remember, brands want to make themselves look as good as possible. This is the best (!) version of the ingredient list they could come up with. And it isn’t remotely good.

As a silver lining, as of the writing of this article, finding Chum dry dog food seems to be increasingly difficult. Only a few select stores are carrying the kibble recipes. In our experience, this might hint at a quiet halt in production from Mars petcare, but it hasn’t been officially confirmed.

This is one of the best examples of a cheap, filler food that can cause health concerns if fed consistently. We’re giving this brand 1 out of 5 stars.

As we’ve mentioned above, the overall ingredients in this food don’t fare too well. The protein selection isn’t amazing either!

For starters, both the kibble and the canned recipes use blanket terms. In Chum’s kibble, “meat and meat by-products” are lumped together in the second slot. The canned recipes, on the other hand, have meat as the first ingredient, but they use the term “meats”, with the possible sources listed afterwards.

This means that from the get-go, you can’t be sure of the exact composition from bag to bag, and sensitive dogs will have a harder time dealing with these changes. We don’t appreciate that all recipes have the same ingredient list, regardless of what it says on the front of the bag! Overall, these lousy marketing tactics show quality isn’t a top priority for this brand.

From a protein percentage point of view, both the kibble and the canned food follow the bare minimum AAFCO guidelines.  This allows Chum to market these foods as “balanced” and “complete”, but we aren’t confident in that statement.

Of course, there are no single-protein recipes (there is no way to know which meats go into each batch!) nor a high-protein option.

We’re taking off 3 stars because of these shortcomings. Not a good option!

For example, the kibble recipe notes “vegetables” as the fourth ingredient. There is no indication of what types of vegetables this includes, which leads us to believe these are vegetable scraps. While vegetables on their own can be a healthy addition to your pup’s diet, with “vegetable scraps” there is no way of knowing what kinds of veggies are included or in what state. In general, these will be the scraps leftover after processing vegetables for other uses, and there is no way of knowing where they come from or if they are fresh.

Chum canned dog food has even more mysterious ingredients. The second most important ingredient is “gelling agents”. These are thickeners that keep the food firm. Knowing exactly which gelling agents are used in dog food is key because some of them can cause intolerances. These kinds of ingredients don’t provide any nutritional value [4] and some common thickenings like carrageenan have caused considerable criticism in the community [5].

The canned recipes also have “vegetable fibre” as the third ingredient, which can be anything from sugar beet pulp to soy or wheat. The problem is we have no way of knowing which! This canned food also includes colouring agents, that we can only assume are artificial.

Finally, the vitamins and minerals added to all recipes are somewhat disclosed in the kibble (not in the canned line).

Overall, we don’t like how the additives have been presented, and it’s important to note they don’t disclose what type of preservatives are used. We’re giving this brand 1 out of 5 stars in this category.

At first glance, one might think Chum offers a small but decent selection. They have both kibble and canned food, and each line has 3 to 5 recipes available in Australia.

Unfortunately, the different flavours are only a marketing strategy. The ingredient lists for all kibble recipes are the same, and the canned line has this as well. Regardless of what flavour you pick, there is no way of knowing the exact composition of the food and there is probably no significant difference in taste. Of course, there are no single-protein options available.

Finally, none of these recipes are fit for puppies, since they don’t follow the minimum 25% protein recommended by the AAFCO for young dogs. We wouldn’t feed this brand to older dogs either, mainly because of the terrifyingly high salt content. Added salt is unhealthy for all dogs, but senior pups are at a higher risk of kidney issues due to excessive salt consumption.

Because of the blatant misrepresentation when it comes to the flavours, we’re giving this brand 1 out of 5 in this category.

This might be the only category where Chum fares well. If nothing else, this dog food is cheap.  The low price of canned bundles is impressive, so we understand why it’s been able to survive for as long as it has.

Nevertheless, what you’ll be saving on food you’ll spend at the vet. We found several accounts of owners having to rush their pups to the ER after a batch caused vomiting and general illness. We would rather invest a bit more in a medium-range food.

We’re giving this brand 3 out of 5 stars in this category.

Do Not Buy If…

This dog food is bad, and we’d recommend you stay away if you:

We’re not loving this brand. In spite of the low price, we don’t think it’s worth it to sacrifice a dog’s health.

If budget is really a concern, we think your dog would fare better with a vet-approved homemade diet. Rice, boiled meat and some veggies will be a thousand times healthier than this. Stay away!