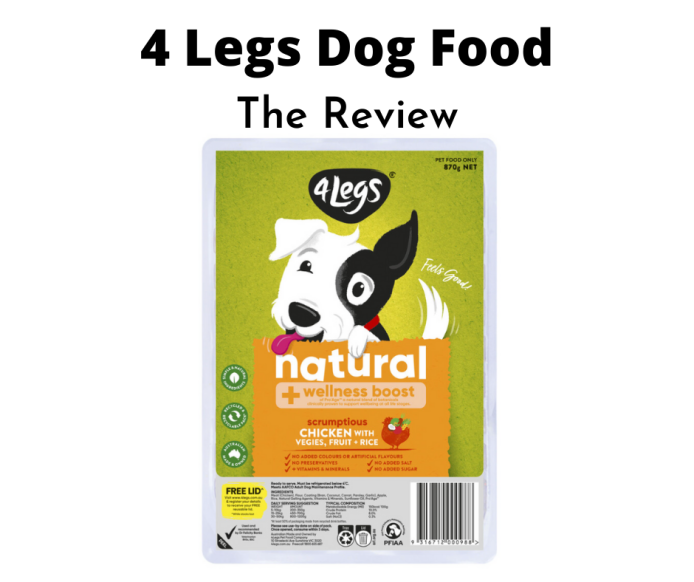 Four legs dog food and 4 legs meatballs have been around for a while. Are you considering adding it to your dog’s regular rotation? Before making a change, here’s everything you need to know about this brand.

This brand claims their food is fresh and wholesome to appeal to dogs, and according to most buyers, their dogs can’t get enough of it! In fact, many pup owners state their fussy eaters wolf down their meatballs with ease. For those dealing with picky eaters that can’t stand most commercial foods, using 4 Legs as a topper makes the whole meal more appetising.

PRO TIP: Have a picky eater? Try a topper. It doesn’t need to be expensive: homemade food toppers are often healthier and more appetising for dogs. Plain boiled chicken or beef, grated carrots or unsalted homemade broth can be great toppers.

On the human side of things, most owners like that the meatballs have a faint smell, even the kangaroo recipe, unlike many chilled dog foods that tend to stink the kitchen. As a result, many people use 4 Legs as travel food or travel snacks that won’t disturb others.

Due to its success with picky eaters, we’re giving this brand 5 out of 5 in this category.

Even though 4 Legs features 6 different dog food recipes for meatballs and rolls, all of them have more or less the same composition and ingredient percentage. 4 Legs recipes start with a named protein, then flour, “vegetables & fruit”, and other minor extras like gelling agents and “vitamins & minerals”.

At a glance, the ingredient list checks some boxes: it has a named protein as the first ingredient, it’s short, and doesn’t have any unrecognisable names in it. But contrasting it with the guaranteed analysis, things start to get muddy.

According to the brand’s guaranteed nutritional composition on all recipes, their food has 10% minimum crude protein, 8% minimum crude fat, and 0.3% maximum salt. While this looks good enough on its own, it’s important to note that good quality dog food should follow the guidelines provided by the Association of American Feed Control Officials (AAFCO). Since Australia doesn’t have specific legislation or an organisation in charge of providing guidelines, companies try to stick to the guidelines proposed by the AAFCO.

In the case of 4 Legs, even though they claim their food is a “complete & balanced meal – meets the AAFCO Nutrient Profile for Adult Dog Maintenance” [2], the facts show a different situation. From the 3 nutrients analysed, only the salt and fat fall within the recommended guidelines for adult dogs at maintenance [1].

4 Legs recipes feature a minimum 10% of crude protein content, far behind the minimum recommended by the AAFCO. AAFCO recommends at least 18% [1]. That 10% is even further away from the recommended 22% for puppies and nursing dogs.

Dog food that doesn’t comply with AAFCO isn’t inherently bad: it just means it can’t be sold as a complete food, and owners should use it as a supplement or treat. Nevertheless, 4 Legs clearly states on their packaging and website that their food follows AAFCO guidelines for a complete and balanced meal. This just isn’t the case. It makes us question whether they are as lax when analysing their food and even putting the full ingredient list on the label.

The blatant lying on the label is a big turnoff for us, and there are other elements that make this brand less than desirable:

All 4 Legs recipes feature flour as the second ingredient, just behind animal protein. As we’ve mentioned before, the first 2 to 5 ingredients in the list tend to be present in roughly equal parts in the food. This means that 4 Legs meatballs have more or less a 50/50 percentage of animal protein to flour, which isn’t the ideal “balanced” ratio for dogs. Moreover, there is no way of knowing what kind of flour they are using, or if it changes at all from batch to batch. Although it is likely white wheat flour, it could be anything and it would be better if they clearly indicated that in the label.

Due to the very low protein content and evident mislabelling for marketing purposes, we’re taking off 4 stars in this category.

Overall, 4 Legs starts with a good enough premise: natural dog food with animal protein as the first ingredient. Looking at the recipes, all of them start with meat. Nevertheless, there are no single-protein recipes and the brand lumps together all types of meat (ie. Chicken and beef) under “meat” and uses it as the first ingredient. Ingredient splitting and ingredient lumping is a common practice among pet food companies to make food look better than it is. It’s likely that, if the protein sources were split, the current second ingredient (flour) would become number one.

However, our main issue with this brand is the low percentage of crude protein in the recipe. As we’ve already mentioned, all 4 Legs recipes feature 10% minimum crude protein content. This is way below the recommended 18% recommended by the AAFCO. The low protein percentage means this food range isn’t suitable as the main component of your dog’s diet, especially if they have greater protein needs (if they are young, lactating, or otherwise need a special diet).

The low protein percentage wouldn’t be a big issue if the food weren’t marketed as complete and balanced. Dogs would need to be supplemented with extra protein if you were to exclusively feed 4 Legs.

Other than that, it would be better to see the protein sources be more specific. The label mentions “chicken”, “salmon” or “kangaroo”, but it doesn’t mention whether this is a by-product, the full animal, a rendered, dehydrated mix, or a combination of these. Considering the poor labelling regarding the suitability of the recipes as a complete food, it’s not surprising to see vague terms in the ingredient list.

Overall, the protein sources are ok but the protein percentage is insufficient. Because of these issues, we’re taking off 3 stars to this brand.

While animal protein and flour make up the majority of these meatballs, this brand has added a few extras to round up the nutritional profile and better appeal to buyers.

This is where the recipes start differing a little. All recipes include a general “vegetables and fruit” ingredient, but these are broken down into specific items. Depending on the recipe, some meatballs will have only two or three vegetables while others will have five or six.

This brand tends to add carrots, broccoli and coconut to their recipes. These add vegetable fibre that is great for your dog’s digestive system, as well as providing some extra vitamins and minerals. Coconut will also add some healthy fats.

Some recipes include other extras like apples, green beans and brown rice. Nevertheless, these are relatively low on the ingredient list and probably have been added in very small quantities.

On top of fruits and veggies, all 4 Legs recipes also include “vitamins & minerals” without mentioning specifics. This probably means the company used a powdered mix, and there is no way of knowing which compounds are included, and in which quantities.

Another addition in all recipes are “natural gelling agents”. Again, this item doesn’t specify which type even though it indicates there might be more than one gelling compound. We don’t love gelling agents, especially because a study by a Dutch research group and published in the Journal Of Nutrition showed that gelling agents could lower nutrient absorption in dogs [3]. According to these researchers, exclusively feeding food with gelling agents can cause serious nutritional imbalance among especially sensitive dogs.

Due to these less-than-ideal extras, we’re taking off 3 stars in this category.

This brand only offers chilled, pre-cooked food. Because of it, owners used to kibble might find the slightly longer prep time too much for them. Nevertheless, many dog owners praise the ease of use and mention that both 4 Legs meatballs and rolls are freezer friendly when portioned in different containers.

From a protein standpoint, there are no single-protein options and all recipes include chicken. Although most dogs can eat chicken just fine, those with allergies or sensitivities will have to look elsewhere.

It’s also important to note that all recipes share the core ingredients and have the exact same guaranteed analysis. This, coupled with the fact that all recipes include chicken, means that there is very little variety beyond the main recipe.

Finally, we should note there are a couple of meatball options for smaller pups. These are smaller in size and come in different recipes (chicken and cheese and beef with veggies) and picky eaters seem to appreciate the flavour.

We’re taking off 2 stars from this category because, even though there seem to be 6 distinct recipes, the core ingredients remain the same. Overall, not a good option for those looking for different varieties within the same brand.

Due to its higher price point and smaller packaging, this food is on the lower end of expensive. It’s not the most expensive in the market, but it’s not particularly affordable either. Of course, the price is probably higher because of the costs involved in chilling the food from production until selling.

Considering the cost, it’s not surprising to see many dog owners prefer to use 4 Legs as a topper or a treat instead of as the base of their pup’s diet. In that case, the cost is in line with other treats and toppers to make “regular” food tastier.

Because of the higher price point when used as a main food, we’re taking off 2 stars.

Do not buy if…

Many dogs love 4 Legs meatballs, but they might not be for you if you:

We can’t recommend 4 Legs as a dog food simply because they don’t comply with AAFCO guidelines. Nevertheless, it can be a good option as a topper or a treat for food-motivated dogs. Many owners use it during training with great results, and as an occasional snack, it’s a good enough option.

Overall, we’re doubtful about their ethics due to the blatant mislabeling and claiming their food follows AAFCO guidelines when it doesn’t. We would be wary and only use it as an occasional treat.