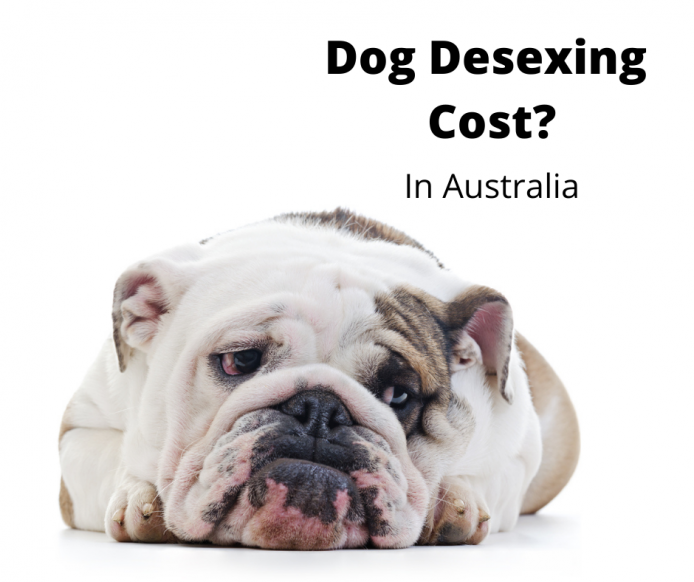 How Much Does It Cost To Desex A Dog In Australia?

If you’re not planning on breeding your dog, desexing them is a socially responsible choice. Aside from being compulsory in certain states, it’s a great way to ensure the welfare of your pooch.

You might have tons of questions regarding this procedure, including the cost. Luckily, we’ve got all the answers.

To find out how much does desexing costs and when to do it, read on.

Table Of Contents
The Australian Strategy
How Much Does It Cost To Desex A Dog?
Applying For Low-Cost Desexing
What About Pet Insurance?
Benefits Of Desexing
At What Age Should I Get My Puppy Desexed?
The Conclusion
FAQ 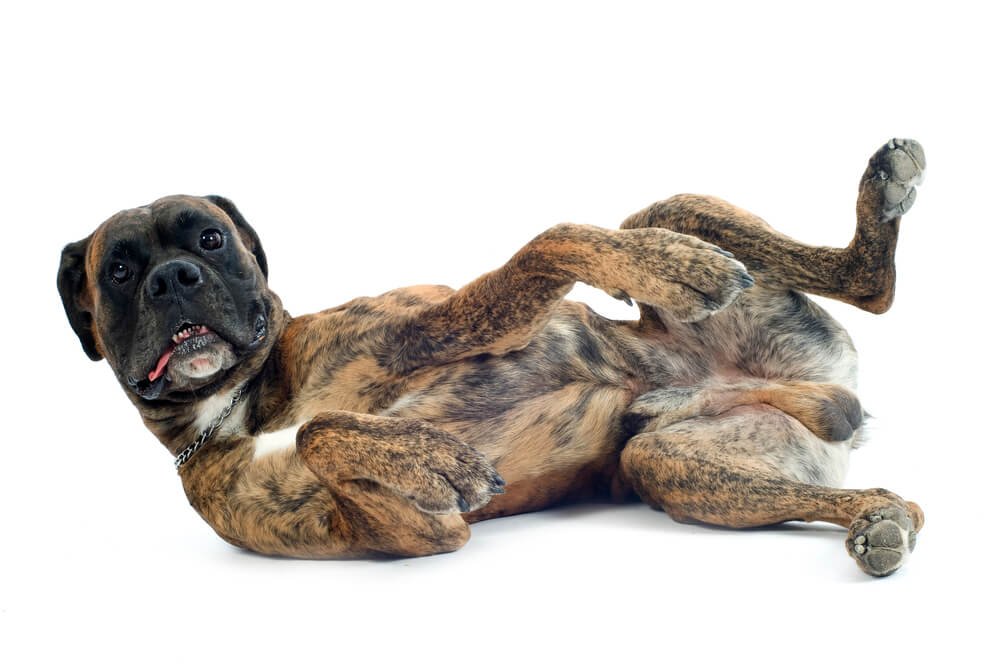 According to the national survey conducted by Animal Medicines Australia in 2019, over 40% of households have at least one dog (1). Speaking in numbers, there are over 5 million dogs across the country. The vast majority of them are sterilised, spayed, neutered - in one word, desexed.

Desexing is a routine procedure performed by veterinarians. It involves removing a dog’s reproductive organs while under anaesthesia. As a result, dogs are not able to produce offspring anymore. This procedure plays a big part in animal population control by keeping the number of accidental litters and unwanted dogs low.

How Much Does It Cost To Desex A Dog?

When planning on desexing your dog, this is a question that naturally comes up. As it usually goes with surgical procedures, the definite amounts vary, depending on several factors such as your dog’s size and age.

One thing that you can expect is to pay more to desex a female than a male dog. This is not surprising given the fact that the surgery done on females is more complex, it’s more time-consuming and requires more medication.

If you’re wondering how much does it cost to desex a male dog, you’ve come to the right place to get a rough estimate. For dogs weighing under 10 kg, you can expect to pay around $180, with the exact cost depending on the clinic. For very large dogs, this number can go up to $500. How much does it cost to desex a female dog then? In this case, the costs are slightly higher. So for instance, desexing Maltese costs around $200, while the same procedure for a Great Dane can be as much as $600.

Keep in mind that these numbers are just a guide. Aside from obvious factors like sex, size and age, the cost of desexing varies by clinic, too.

We’re not going to lie, desexing can be quite pricey, especially when you add it up to other pet costs such as food or vet bills. Luckily, there are some low-cost dog desexing options out there for pet owners across Australia that you can apply for.

National Desexing Network is an Australian referral system for discounted desexing procedures that are available for dog parents in genuine financial need. Over 160 veterinary clinics participating in this network from every part of the country and to this day, they have helped over 200,000 pets get desexed.

Since July is a National Desexing Month, during this time of the year many veterinary clinics across the country are offering discounts to their fees to encourage pet owners to desex their pets and give them a healthier life. Depending on the clinic, these special offers can be available to all during the month of July, not just those that are eligible for the NDN program.

Many local councils have also recognised the benefits of the National Desexing Network program. By helping low-income pet parents with getting their cats or dogs desexed, they’re lowering the numbers of euthanised or re-homed unwanted cats and dogs. They help by providing a desexing voucher to eligible pet owners to lower the cost of the procedure from selected veterinarians.

Currently, there are 12 councils across the country that participate in the National Desexing Network program:

So, what are the conditions you need to fulfil to be eligible for this voucher? While there might be some differences depending on the vet clinic and the councils you’re contacting, the conditions are pretty much the same. Aside from being a resident of a certain area, you also need to have a valid pension or a concession card.

Finally, you need to be registered as the owner of your pooch to be able to use this voucher.

What About Pet Insurance?

With the exception of two states where desexing is mandatory, this is generally an elective procedure. Most insurance policies simply don’t cover preventative, routine or elective treatments.

That’s because these procedures are expected, so theoretically, you can plan them and start saving ahead. With that being said, there are some insurance policies that do cover desexing to an extent in comprehensive policies.

Other than being obliged by law, why else should you put your dog through this procedure? First things first, desexing a pet reduces the risk of cancer on reproductive organs. Both mammary and prostatic cancers are extremely common in dogs, and removing these organs is the only way of preventing these diseases (2). Desexing also helps with other health issues, such as uterus infections and false pregnancies in female pooches and prostate disease in males.

As you may know, sex hormones affect the behaviour of all living beings, and dogs are no exception. With the loss of their reproductive organs, their need to wander in search of a partner is less likely. Aggression towards the same sex and the urge to territory marking can also be reduced. However, while most of these behaviours are driven by a dog’s hormones, there’s no guarantee they’ll change with the removal of sex organs. This is especially true with older dogs, who might continue exhibiting these behaviours out of pure habit.

At What Age Should I Get My Puppy Desexed?

For the longest time, pet parents were advised to desex their pooches as soon as they hit a 6-month mark. But, with the improvement of evidence-based medicine, veterinarians are today able to decide when the best time to desex an individual dog is.

Getting a dog desexed before reaching puberty is considered to be early desexing (3). This is usually done in shelters, as it prevents unwanted pregnancies and keeps the number of dogs in the shelter from multiplying. That’s why most pups adopted at a young age are already desexed.

Although it might seem counterintuitive, putting a young pooch through such an experience practically has no impact on their health in the long term. With young pups, the womb or testicles are immature, so both surgery and post-op recovery require a much shorter time period. What’s more, modern-day anaesthesia has improved a lot, so the risks are basically nonexistent.

Of course, there’s the other side of the story, too. Sex hormones have an effect on bone growth. Simply explain, they send signals that the dog has matured, so growth can slow down, and eventually stop. When a dog is desexed at an early age, the body stops producing these hormones. As a result, bone growth plates stay open for a longer period, dogs grow leggier than they would otherwise be as adults. This also creates a slightly higher possibility of orthopaedic issues in later stages of life. One thing to note is that early desexing affects large breeds way more than smaller ones. That’s why big dogs should get it done later in their development.

Getting a dog desexed later in their life can affect their health too, especially in females. The older your canine friend is, the higher is their risk of getting cancer. Some Australian states have mandatory desexing legislation, so depending on where you live, desexing might be obligatory as soon as a dog hits 6 months. But, if you live in states where desexing that early is not compulsory, you can choose to do it when the time is right for your pooch.

The Right Time To Desex

But when exactly should you get your dog desexed? There’s no single answer to this question. It depends on your dog’s age, sex, breed and overall health, so the date should be determined after consulting with your veterinarian (4). Generally, you’d want to desex male dogs sometime after their first birthday. With big breeds like Great Danes or Mastiffs, waiting until they’re 18 months old is even better. That you, you’re sure their bones have stopped growing.

When it comes to female dogs, the right time to desex would be between her first and second heat. Smaller breeds could be desexed even prior to the first season, but this should be avoided with large breed pooches. In their case, it’s best to wait until the first birthday, or right before the second heat.

Aside from being mandatory in certain states, desexing is clearly beneficial to every pup’s health. In this article, we’ve touched on the subject, including the benefits, age and cost of the procedure.

With all the information you can, as a responsible pet parent, plan in advance to help your pup live a longer and healthier life.

Will my dog become fat after desexing?

While removing reproductive organs may cause your dog’s metabolism to slow, there’s no proof of a direct connection to weight gain. Therefore, if your dog does gain weight after their surgery, it is more likely to be due to the diet or the amount of exercise they’re getting on a daily basis.

Should a female dog have a litter before being desexed?

This is just a myth. There are no proven benefits of having a litter prior to getting desexed. In fact, doing so might even cause certain health issues, like an increased risk of developing mammary cancer.

Is the surgery dangerous?

Desexing is a routine procedure. Your dog will be under general anaesthesia while the vet removes reproductive organs. It’s quick, simple and with minimal complications. You can expect your pup to be a bit quiet and groggy the same night, but by the next morning, your canine companion will be as happy and jumpy as always.