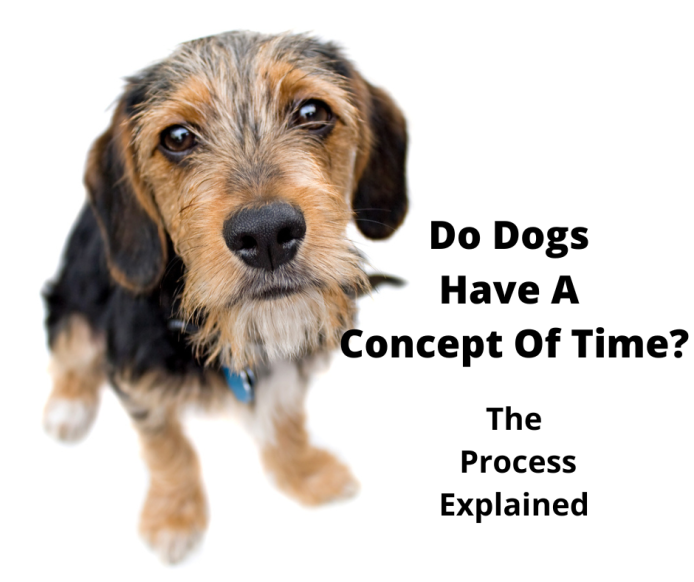 Do Dogs Have A Concept Of Time?
Canine Sense Explained

Probably all dog parents feel at least a bit guilty about leaving their pooches home alone while they're off to work. No one wants their canine companion to sit sadly by the door waiting for their return.

Whether it’s been five minutes or eight hours, most pooches welcome their owners as if they were gone for an eternity. So you’re probably wondering what’s the deal with that. Do dogs have a concept of time?

That’s what we're going to find out today. Keep reading to learn more.

We’ve all heard the saying that one human year is proportionate to seven dog years. But the whole idea of dog years is merely based on human-to-dog life span comparison. When it comes to the dog’s perception of time, it would be wrong to assume dogs experience time passing seven times faster than we do.

After all, the whole concept of time is merely a human construct that helps us differentiate between past and present. In other words, time is an illusion based on the timeline of our memories.

To understand if dogs can perceive time, we need to understand how they create memories. Specifically, we're talking about long-term memory.

The Science Behind Creating Memories

Long-term memory is formed from both implicit and explicit memory. Implicit memories are the ones that we recall unconsciously, without thinking about them. A good example of implicit memories is learned skills. Take riding a bike, for instance. Once you learn it, you can do it many years later without thinking about the steps. But explaining the whole process of bike riding to someone is hard, practically impossible.

When it comes to implicit memories, there’s no doubt that both humans and dogs can experience them (1), as they demonstrate their learned skills every day. Catching the ball as soon as you throw it is a good example of implicit memory.

Explicit memories, on the other hand, are conscious and much easier to communicate verbally. Now, there are two types of explicit memories, semantic and episodic. Semantic memories involve remembering facts. For instance, we know that Canberra is the capital of Australia because we learned that a long time ago. Dogs experience semantic memories too - it’s what helps them associate commands with proper actions they’re asked to perform.

Episodic memories are based on personal experience. To put it simply, episodic memory is the ability to recall and reexperience something that happened in the past. It allows us to remember what we did and how we felt about a certain event, even if it was a very long time ago.

For a very long time, scientists believed dogs don’t have episodic memory. The conclusion was based on the fact that there’s no way to test that. We can’t ask dogs if they remember a specific event, can we?

Well, it turns out there might be a way. In a 2016 study, researchers trained the dogs to imitate their actions without using verbal commands, both one minute and one hour after being performed (2).

The dogs were successful in repeating actions in both instances, which clearly indicates they remember a specific moment in the past. Of course, a definite conclusion can’t be drawn because the dogs can’t exactly tell us they remember them, but we can assume it’s true.

If dogs can recall the past, does it mean they have a concept of time? Again, the answer isn’t that simple.

While dogs experience episodic memories, it’s unclear if they can precisely locate certain events on their timeline. For instance, dogs aren’t axiomatically scared of going to the vet. It’s usually that one ugly experience in the past that makes each subsequent visit upsetting. But while dogs remember how they felt in a previous situation, they might not remember when it happened - was it yesterday, last week, two years ago… What this means is that they don’t have the same perception of the past as humans do.

There’s also little evidence that dogs have a concept of a future similar to humans. That doesn’t mean they can’t think about the future, but it’s probably in a different way we’re still yet to figure out.

The book “Being a dog” by a dog behaviourist Alexandra Horowitz shows an interesting theory that dogs might smell time. We know that dogs have a sense of smell that’s up to 100,000 times stronger than ours. Even after you leave the house, your smell still stays around for a while. The book author believes that dogs can use the lingering smell to calculate how long you’ve been gone. This theory is yet to be further researched, but it’s an interesting idea to ponder upon.

Do Dogs Have A Sense Of Time

While we can’t say for certain whether dogs have a concept of time, it’s clear that they have a really good sense of it. After all, they can have impeccable timing for dinner and walkies even though they can’t read the clock.

Related: Why Do Dogs Lick?

Dogs easily pick up on daily routines. Let’s say you start walking the dog every morning at 10 AM. After a few days, your dog will start anticipating the walk when it’s close to 10. Of course, this isn’t that strange at all. Just like humans, dogs have a circadian rhythm as well. They know when to sleep and when to be awake. And with a little bit of routine, they’ll start having biological potty cues at the same time as well.

This brings us to the question all pet parents are wondering - can dogs tell how long they were left home alone?

A study published in Applied Animal Behaviour Science tried to investigate that (3). Researchers have video-recorded dogs in their homes while home alone for different periods of time, ranging from 30 minutes to 4 hours. Although dogs showed no difference in behaviour during that time, what they did differently is how they greeted their owner after a certain period.

Pet parents that came back after 4 hours received much more tail wags and face licks than those that came home after just half an hour of being away. Now, it’s unclear whether dogs understand exactly how long they were alone, however, it’s obvious they are affected by the duration of that time.

Understanding The Length Of Your Absence

All those kisses and tail wags clearly indicate that dogs have missed their owners while they were gone. So naturally, many pet parents wonder how they can let their pooches know the duration of their absence.

Dogs know that putting on a jacket and shoes means you’re heading out the door. But it’s the small things that can show how long you’ll be gone. For instance, leaving the house in your pyjamas with a garbage bag in your hand is a clear sign you’re coming right back. Carrying a briefcase and wearing a suit, on the other hand, means you’re off to eight long hours of work. These are all visible cues that will let your dog know when to expect your return.

Given the fact that dogs can’t talk, it’s practically impossible to prove they have a concept of time like humans but it’s clear that they can sense it.

Whether it’s their circadian rhythm, lingering smells or visible cues owners give off, you can rest assured that dogs can have a pretty good idea of how long they’re left home alone.