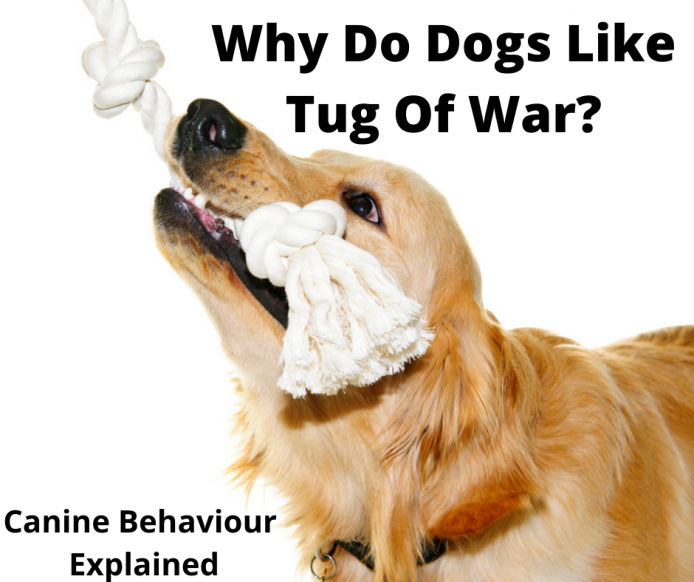 Why Do Dogs Like Tug Of War?
Learn The Science

There are not many things dogs love as much as playing tug of war. No matter how tired they might be, if you show them their favourite tug toy, they’re up and ready for playtime in a matter of seconds.

But why do dogs like tug of war? Our pooches can’t tell us the answer, but science can. In this article, we’ll cover different reasons why dogs might like this game.

Table Of Contents
Why Do Dogs Like Tug Of War So Much?
How To Play Tug Of War
Debunking The Aggression Myth
Who Should Win The Game Of Tug?
Final Thoughts 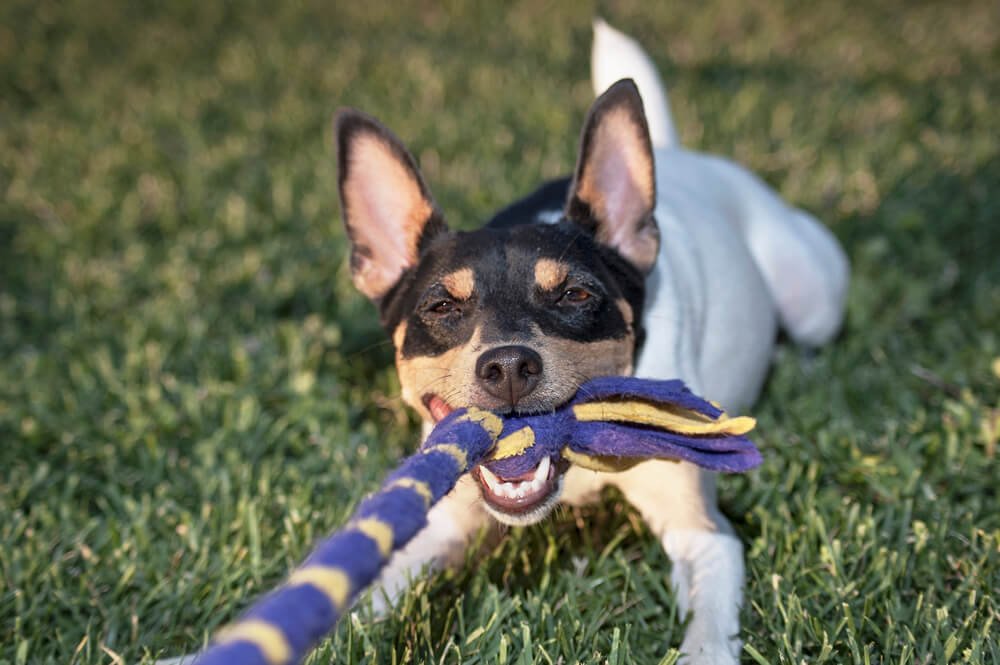 Why Do Dogs Like Tug Of War So Much?

Pretty much every dog love playing tug. But what’s so special about that game? According to numerous studies done on this subject, these are the three most probable reasons.

If you leave your dogs alone with a rope, there’s a good chance of them starting a good ol’ tug of war game. Such a simple object as rope allows them to play together and thus strengthen the bond. They’ll probably be growling at each other, but in most cases, that’s done in a playful manner.

While dogs playing tug of war might look like they’re competing against each other, this game is actually based more on their collaboration than competition. This is most apparent when dogs of different sizes are playing this game. Imagine a Chihuahua and a Retriever playing tug of war. For the game to work, they will have to pull the rope with equal force. However, it’s obvious that Retriever is a way stronger player here and will have to be gentle when pulling.

Most dog owners had the opportunity to witness gentle giants barely pulling the other side of the rope, trying not to hurt their tugging friends. This makes it clear that they’re not playing to win.

Our dogs love playing this game with us for the same reason.

Another reason why dogs like this game is because it’s a great way of using excess energy. Tug of war engages all the muscles and only a few minutes of intense playtime can be enough to tire your otherwise energetic pooch.

Since this game can be played indoors, it’s especially valuable to dogs that live in apartments and don’t always have the opportunity to use up their energy by running.

Finally, there’s a slightly darker explanation of why pooches love this game. In a way, tugging and shaking are mimicking instinctive behaviour. Ancient dogs hunted animals that hid in the burrows, so they had to drag them out of there in the same way our pets pull on the rope during playtime.

When our pooches shake the rope violently from one side to the other, they’re mimicking the way their ancestors would kill the prey. That doesn’t mean your canine companion is expressing suppressed aggression. But in case of an apocalypse, let’s just say that we know who’ll provide food for your pack.

How To Play Tug Of War

To make this game a fun and healthy activity, here are some things you should know beforehand.

Some dogs will try to play this game with just about any toy, but not everything is made to last through such an intense game. A tug toy should be flexible, long-lasting and have a handle so that your hand is out of your pooch’s mouth. Most tug toys are made of either rubber or rope and are comfortable in your hand.

You can find our guide to best dog toys here, and a list of indestructible toys here.

Pick The Right Spot For Playing

The great thing about this game is that you can play it indoors and you don’t need a lot of space. However, you should choose the spot where you’re not surrounded by fragile objects. The game can quickly become pretty intense, and if the toy ends up flying, it can easily knock things around. The last thing you want is the toy to crash your TV, right?

Be The One To Initiate The Game At First

If it were up to our dogs, playtimes would never end. It’s very touching how they love doing things with us so much, but they need to know when that’s possible and when it isn’t. If we allow our pooches to initiate tug of war whenever they want, they’ll start following us around the house with toys in their mouths.

This doesn’t mean you should always ignore your dog’s call for play. If you’re not busy with chores around the house, then there’s no reason why the two of you couldn’t enjoy a nice tugging session. However, if you’re not in the mood or swamped with work, your pooch should understand when you say “no” no playing.

This way, you’re teaching your dog to not be pushy and that you decide when it’s playtime and when it isn’t.

Teach Your Dog To Drop The Toy When Asked

While tugging, your pooch might start growling. Usually, this is normal and expected to hear from an excited dog but pay attention. If you believe your canine friend is becoming aggressive, dropping the toy and taking a break is necessary for preventing things from getting out of control.

The “drop it” command is important not only for the sake of playing tug of war (1). Teaching your dog to drop things when demanded will prove to be quite useful the next time you see your pooch carrying a dead pigeon.

During the play, ask your dog to drop the toy. Don’t shout, just use your natural, speaking voice. When your pooch lets go of the toy, give the praise and treat. Then you can do it all over again.

The Game Is Over When You Decide So

Just like it’s up to you to initiate the game, it’s up to you to end it, too. In most cases, dogs will play until they’re dead tired. But, if you have other things to do or simply aren’t in the mood for playing anymore, it’s time to let your dog know the playtime is over. Ask your pooch to drop the toy and reward obedience.

You’ve probably heard other dog owners saying that playing tug of war can make your dog aggressive. However, this claim is not based on scientific evidence.

According to a study published in Applied Animal Behaviour Science, there’s no connection between certain games we play with our dogs and behavioural problems they might be expressing (2). On the contrary, games like tug of war and fetch make dogs more confident to interact with humans and other dogs.

In other words, your dog won’t become aggressive just because you guys play rough (3).  However, if your pooch has a history of human-directed aggression, then tug of war might enhance already existing behavioural patterns. In such a case, avoid playing this game.

Who Should Win The Game Of Tug?

Lots of dog trainers advise not to let your dog be the winner in this game. Their worry is that the dog will see you as submissive if you lose. Numerous studies are conducted on this matter, but none of them proved these trainers are right. In fact, they showed that letting dogs win will make them even more interested in playing with you.

Everyone loves victory. Remember how you’ve felt the last time you won a basketball match against your friends, for example? Just like we feel proud and happy to win, our dogs do too. It boosts their confidence and makes the game even more entertaining. On the other hand, losing every time will probably leave them bored and uninterested.

So don’t worry, losing in a tug of war doesn’t make you less of a leader in your pooch’s eyes. It makes you a worthy opponent and a fun game partner. As long as your dog plays by the rules, enjoy this fun activity without worrying about who’ll win.

Playing tug of war with your pooch is a great way for both of you to work out and have fun at the same time. Dogs love games, but they love us even more, so this type of interactive play means a lot to them. When played by the rules, a tug of war game will be a rewarding experience.

Olivia is a professional writer and animal lover. She loves spending time with her Podengo and Flat Coated Retriever, and writing pieces to help people to be better dog owners